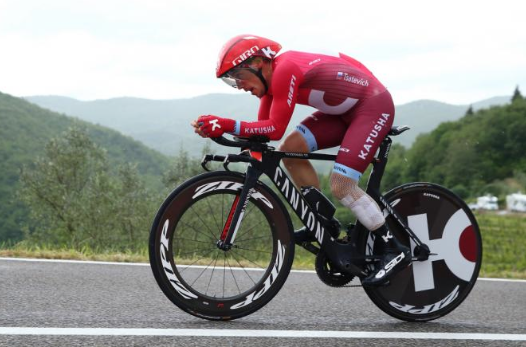 In a statement on the second rest day, directeur sportif Dmitry Konyshev said the way in which Tsatevich rode was “absolutely unacceptable” and therefore the commissaires penalty “was not enough for us”.

The Russian rider has since responded to being withdrawn from the race on his personal website.

“I am very upset about this situation. During all race I tried to show good results. I fell several times, I got up and continued race again, through feeling of pain, in order to be useful to team,” wrote Tsatevich. “On my feelings during ITT, I keep a distance. The judge didn’t warn me about violation of a distance, and so, I continued the race.”

Tsatevich also suggested that he wasn’t the only guilt party, adding “Also, I want to note, that I didn’t ignore the requirement and request of the sporting director.

“Anyway, I wish good luck to guys! I will support team at home as the viewer. I apologize for the inconvenience.”

In March, Tsatevich won the final stage of the Volta Ciclista a Catalunya ahead of Primoz Roglic who incidentally was the winner of the stage 9 Giro time trial.