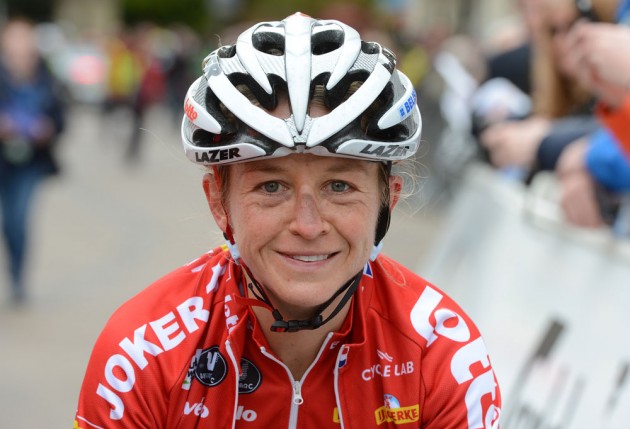 Emma Pooley has talked to Cyclingnews about where she was on 12th June 2011 and asked Team Sky and Dave Brailsford to clarify their statements on the matter Team Sky and Dave Brailsford incorrectly suggested that a member of British Cycling staff, Simon Cope, travelled to France to meet Pooley when in fact he was delivering a medical package to Bradley Wiggins at the 2011 Criterium du Dauphine.

On Friday Pooley found herself in the middle of a media storm, her phone inundated with messages and calls due to a report in the Daily Mail.
Pooley is typically interviewed about her athletic performances or her thoughts on the state of women’s cycling but on this occasion it was her whereabouts on June 12th 2011 that was called into question.

This was because Dave Brailsford had initially told the Mail that British Cycling staff member Simon Cope had travelled to the Dauphine to meet with Pooley. It was later reported by the Mail, and confirmed by Team Sky and British Cycling, that Cope had in fact travelled to France at Team Sky’s request. British Cycling also later confirmed to the Mail that the package he delivered contained a medical substance. Pooley was in Spain at the time, competing in a women’s stage race, several hundred miles away from the Dauphine.

While British Cycling and Team Sky are now in the middle of a UKAD investigation into potential wrongdoing, the initial statement that Cope was visiting Pooley has created further questions. How, when concise facts were clearly demanded by the Mail was such an excuse given?

Speaking to Cyclingnews, Pooley added further details regarding her whereabouts on the date in question: “The only thing I know is where I was on June 12th and I absolutely was not meeting anyone from British Cycling, anywhere. Certainly not Simon Cope at La Toussuire. I was at a stage race in Spain losing the yellow jersey on a descent in the rain. I can distinctly remember it because it was a bit of a disaster. I looked up my old training diary to see if I’d forgotten or anything and I’ve still got the flight numbers from how I got home. I would have got home at around midnight and I certainly didn’t go to France,” she told us.

According to the Mail, Brailsford and Team Sky have yet to clarify why Pooley was even brought into the equation. Cyclingnews has since contacted Brailsford directly, offering him the chance to explain. He has not responded and last week he refused to answer our questions relating to Wiggins’ TUE use and Team Sky’s anti-doping policies.

“I have no idea why they would have said that someone was coming to meet me. I don’t know,” Pooley said of a situation that looks increasingly bizarre.

“I’m the kind of person who keeps records of everything. Maybe it was an honest mistake. It’s clearly quite a serious issue because it’s about the perception of cycling, and anti-doping. I think you should check statements before you come out with that kind of thing. When you’re being questioned about something as important as this you shouldn’t just come out with guesses and if it is an honest mistake then he should be checking his facts. It doesn’t matter to me, it just looks bad for them. It’s at best silly and careless.”