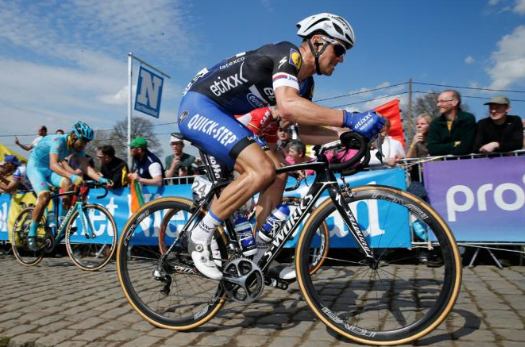 The Belgian team are yet to finish on the podium in this classics campaign with Leferve expalining on the eve of Flanders its not due to any ‘tactical’ shortcomings.

“For me, we haven’t been beaten tactically. We’ve been beaten physically but I haven’t seen any team that’s stronger than us,” Lefevere said. “With the strength of the team we have, we need to isolate the other leaders. The more riders you have up there, the more chances you have.”

Zdenek Stybar was the best of the men in blue as he finished in eighth place, one place better than his performance of 12-months ago when his dentures rattled out of his mouth on the Kwaremont. Niki Terpstra finished in the same group as Stybar to make it two in the top-ten with Stijn Vandenbergh (13th) and Tom Boonen (15th) a handful of seconds slower.

“The moment where he went with Kwiatko we were there in front,” Stybar said of the moment when race winner Peter Sagan (Tinkoff) made his move. “Stijn was up front which was ideal for us but there was nobody to close the gap.”

Etixx-Quick Step had been active with Tony Martin busy on the front of the peloton and Vandenbergh heading up the road on the second ascent of the Oude Kwaremount to take the burden of chasing off his teammates.

A flat innocuous section of road in Nukerke provided the launching pad for Sky’s Michal Kwiatkowski and Sagan with Sep Vanmarcke (LottoNl-Jumbo) digging deep to bridge across to the last two world champions. With Vandenbergh up the road the responsibility to close the gap fell to Etixx’s rivals and as Fabian Cancellara hesitated in making a move, the race was riding away despite the efforts of his teammate and former two-time winner Stijn Devolder.

“Cancellara was trying to close it and then he kind of gave up. They were directly gone and there was nobody who could close the gap anymore,” said Stybar, adding there was an element of “surprise” to the Kwiatkowski and Sagan attack and “we always want to win with our team. We did our best. We couldn’t do anything better.”

While Kwiatkowski eventually made his way back into the chasing group, Sagan was riding off of the win having crested the Paterberg solo. Vandenbergh helped Terpstra attempt to bridge the gap with Stybar joining his teammate in the chase but there was no catching the strongest man in the race.

“Ten man were able to win today. We made it a nice race,” he added. We had three men in front for the top-10 but we weren’t able to finish it off.”

“It’s sad but that’s cycling. We can’t be happy that we didn’t win. We came to win,” said Stybar.

Etixx-Quick Step will look to claim its first podium of the classics at Scheldeprijs with three-time winner of the mid-week race Marcel Kittel before the final opportunity of the spring at Paris-Roubaix. The team last won the race in 2014 with Terpstra and had Stybar on the podium in second place last year.

With four-time winner Tom Boonen also in the squad for the ‘hell of the north’, Etixx-Quick Step will again start the race with one of the most experienced and strongest teams in Compiègne with Lefereve expecting nothing less than a victory.